One of the Many Benefits of Being Justin Verlander

It's fairly common practice for baseball's elite starting pitchers to get more favorable ball/strike calls from umpires. This is especially true for Justin Verlander, the best pitcher in baseball. As you might imagine, Justin Verlander is already a very good pitcher without getting the benefit of the doubt from umpires, because he is Justin Verlander, someone who has won the Most Valuable Player Award as a pitcher, which is a very difficult thing to do. So when Justin Verlander does get a favorable strike zone from the umpire--regardless of whether or not he needs it--well, there's not much you can do as a hitter except go through the formalities of your official at-bat and forget about acquainting yourself with first base.

On Tuesday night, Verlander carried his Detroit Tigers to a 3-0 series lead on the New York Yankees by pitching into the ninth inning and only allowing three hits and one run. He also did not walk anybody. This is an impressive feat, because even though the Yankee are currently mired in an epic offensive slump, they are still the Yankees, and they tend to take a lot of walks regardless of other factors. Below is the strike zone Verlander got from the home plate umpire, depicted from the catcher's perspective; the red squares are called strikes, green squares are balls. Circled are the pitches that were called strikes by the umpire, but were in reality, as we can see, out of the strike zone:

Seven of the nine Yankees facing Verlander were batting left-handed, and thus were standing on the right-hand side of the above image. On top of having to contend with Justin Verlander, which is difficult enough on its own, they had to contend with a home plate umpire who consistently called pitches several inches off the outside part of the plate as strikes. That is, as they say, a tall order. Below is an example of how this challenge manifested itself: a seventh-inning at-bat between Verlander and Raul Ibanez, the latter of whom represented the tying run for the Yankees with two outs: 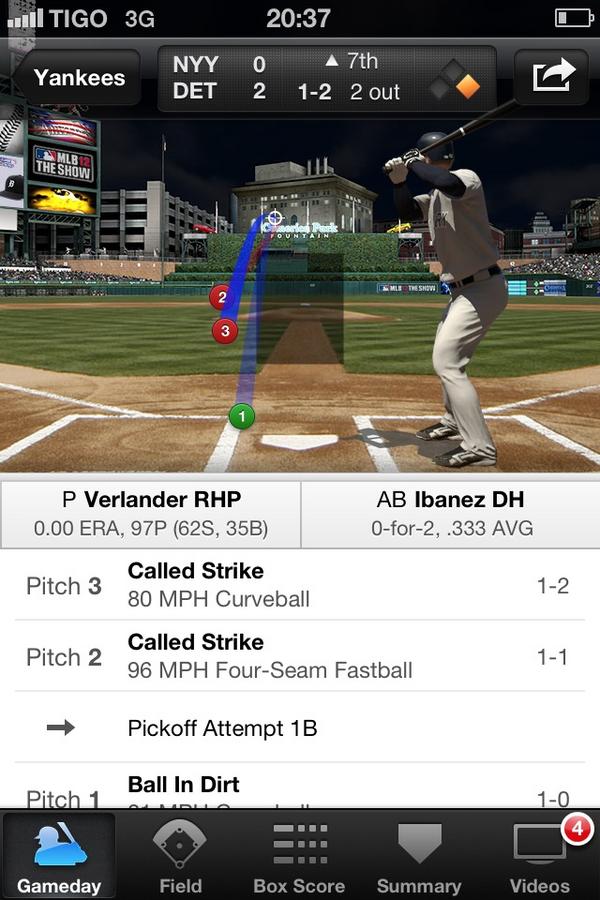 The first pitch, as the image shows, was some sort of breaking pitch in the dirt that Ibanez laid off of, making the count 1-0. Ibanez could then expect to be thrown a fastball in the zone--a potentially tasty pitch for a dead-red fastball hitter like Ibanez. Verlander did throw a fastball, but at this point he knew he did not have to actually throw it as a strike for it to be called a strike. He threw two pitches Ibanez couldn't do anything with, a fastball and a curveball off the plate, and both are called as strikes. The count is suddenly 1-2 even though Ibanez would see it as 3-0. Ibanez would ground out weakly to first to end the inning.

Did the starter opposite Verlander, Phil Hughes, reap the same benefits of an expanded strike zone? Not really. In fact, the opposite. Below is Hughes' strike zone. The circled green dots are pitches thrown by Hughes that were within the strike zone, but were nevertheless called as balls by the umpire: 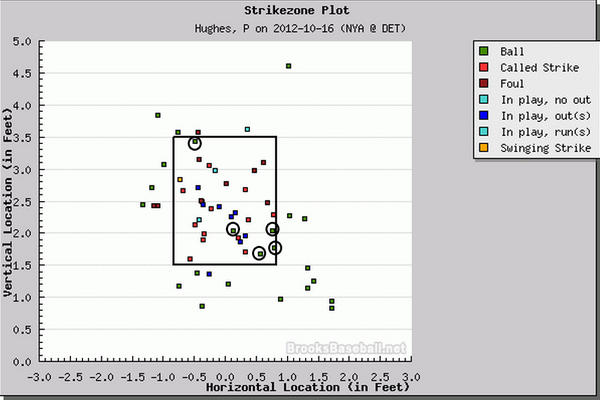 So based on this, five of Hughes' 61 pitches (8%) were balls that should have been called strikes. Verlander was not squeezed in the same way: another brief skim of his strike zone above shows that just one of his 132 pitches (0.7%) was a ball that should have been a strike. Conversely, 10 of Verlander's pitches that were off the plate were called strikes anyway. Not once did Hughes get a call like that in his favor.